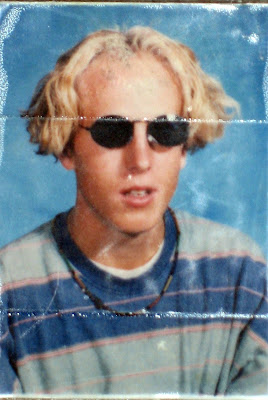 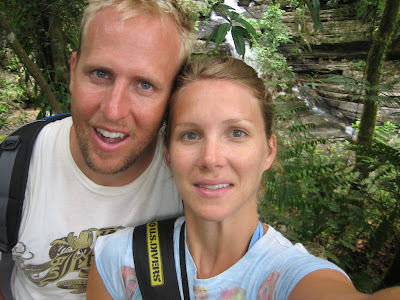 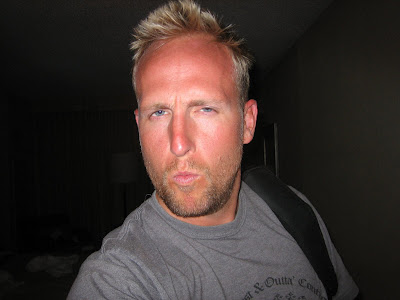 1. What is his name? Wade Austen Pilling. His middle name is after the actor Steve Austen who played the Six Million Dollar Man in a 70's show called Bionic Man
2. How long have you been married? 8 1/2 years. If you ask Wade he says, "seven, eight years".
3. How long did you date? Met in October, engaged in March, married in July. Yikes! We only knew each other 9 months when we were married.
4. Who eats more? I totally eat way more than him. He'll forget to eat, and if I'm not home to fix him something he doesn't eat. That's why he always loses at least 5 pounds every time I go out of town.
5. Who said I love you first? I can't remember. Probably me, but I think we felt it at the same time.
6. Who sings better? Well, that depends on who you ask. I'll leave it at that. I don't want to hurt anyone's feelings.
7. Who is taller? I'm 5'4" Wade's 6'.
8. Whose temper is worse? Mine, by far. He calls me a firecracker.
9. Who does the laundry? That's a joint effort. I do it more consistantly, but Wade's been known to rescue me from huge mountains of laundry on many occasions.
10. Who does the dishes? me, but not exclusively. He helps a lot, but the whole kitchen area makes him a little uncomfortable.
11. Who sleeps on the right side of the bed? Wade, but that switches sometimes.
12. Who does the cooking? Did I mention he's scared of the kitchen? If he does any cooking it's on the grill, and he does grill an amazing steak.
13. Who is more stubborn? We're both really stubborn.
14. Who proposed? Wade.
15. Who is more likely to admit when they are wrong? Me. Wade kind of thinks he's right, all of the time. The frustrating thing is he is most of the time.
16. Whose parents do you see the most? We live two hours from his and 12 hours from mine, but actually it seems like we see mine as much as we see his.
17. Who pays the bills? That's all me. Well, not ALL me. I guess he does make the money with which to pay the bills.
18. Who wears the pants in the family? Do I really need to answer this one?
19. Why do you love your husband? Why not is more like it? First off he's totally charming, funny and gorgeous. I've always felt completely safe and secure with him and have never doubted his ability to take care of me and the kids, ever. He sees most things exactly opposite the way I do (he plays the devil's advocate A LOT), so he constantly makes me think and reassess my points of view. A lot of times this frustrated me, but most of the time I feel like I'm learning and growing when I'm with him. Wade is the most capable and assertive person I know. If there is a way to get it done he will make it happen. He can make me laugh till' I pee my pants, he snorts when he laughs, he does the best rump shake you've ever seen, his morning hair totally turns me on, and he's pretty much amazing on a pair of skis. He loves me and the kids so much and pushes us to experience new things and test our limitations. He really is a good man with a big heart. And, seriously, did you see those pictures of him? Be still my heart! Love you Babe!

So I'm not tagging anyone specifically, but you all know I'd like to hear all about your hubbies.

elizabeth - that first picture is a truly amazing picture of wade. the perm is my favorite. did you even know we had a blog? we do. mostly it's for me to waste time at work, and complain about ohio. i think jordan is coming up there today - i'm jealous he gets to see you guys!

Wade is so one of a kind. That was fun to read. I got some good laughs. That picture is the greatest. Good thing we married our husbands and taught them some style because both of their before and afters are hilarious.

cute, Elizabeth!! Is that a real school pic? you are so funny and so is wade...we love being neighbors...it's fun to read these cuz you realize how perfect everyone is for each other!! :)
Love, Sum

After seeing Wade and Brad's high school pictures it makes perfect sense to me why they get along so well! I loved learning more about Wade "bionic man" pilling!