sometimes i compare my kids 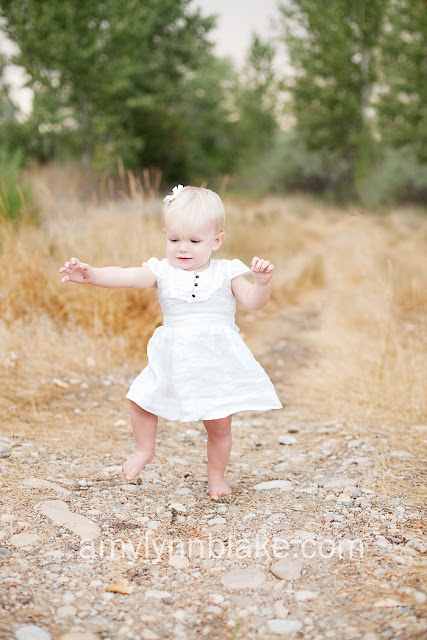 this little dab started walking a couple weeks ago.
she's almost 15 months, thank you very much ma'am.
she started crawling at 10 months and did it in the curious fashion of crawling with one knee on the ground while pumping and pushing with the foot of her other leg.
this is how she crawled.  always. never putting the other knee down.
so one leg got a lot stronger than the other, and now that she's walking she has a limp.
i fully expected her to only be able to walk in circles, but she's managing.
she took her sweet time, though.
except, she's been a great little climber for a while,
which sent up some red flags on the
will-this-one-be-as-crazy-as-whitney-o-meter
that's always purring away in my brain.
yes.  i compare my children to one another.
it's how i prepare myself for what's coming.


like devan.
she gets measured up by the
will-she-be-as-dramatic-as-nikki-o-meter
that's currently on RED ALERT in my brain.
it seems there's a glitch in my system, though.
i might need a newer model, or to re do my base-lines because devan is completely off the charts right now.


for example: lately she's taken to running away when she gets her feelings hurt, which could be cause by: touching her hair the wrong way, saying her name in the wrong pitch, giving someone else a compliment, offering her the wrong cereal, or any other endless scenarios.


i remember running away when i was a kid.  i'd get mad, pack all my clothes in a  paper grocery sack and climb out my window headed for the neighbors'.  they never wanted me, so i always ended up right back in my room.


the problem with devan running away (other than that she's barely four) is that she doesn't want to run to the neighbor's house.  she wants to be much further away than that.
so today (this is still a very new thing) she ran away, for who knows what reason, and after i realized she was gone we searched high and low and found her nowhere.  finally, a man from church was seen walking her down the street towards home.
she wasn't even going to his house.  he just happened to see her skulking down the street as he pulled in after work.
we went through the whole bit.
you could be lost.  you could be taken away by someone.
yada yada yada.
and do you know what that cheeky little thing said to me?
"i want to be lost from here.  i want someone to take me far away."
i can understand her saying that if she'd been yelled at or gotten in trouble for something.
but there was none of that.  she just got butt-hurt about something and decided she wanted out.


how old is does this girl think she is?


i guess we will be employing the latch-system in full force once again.
and i thought we were in the clear after whitney.
not so.
this all adds variety to my day, i keep telling myself (so i don't cry).  it's a good thing she's as awesome as she is.  it makes up for stuff.
and i'm still waiting for the chance to try out my
will-this-one-be-as-mellow-as-max-o-meter.
HA!
i should probably take that one back to the store.
at any rate, gwen is walking beautifully,
despite a touch of skootch leg.
she's so funny.


the only people obligated to watch this whole video are gwen's grandmas.
but i think it's cute.  so i'll watch it again.

Sometimes I compare my baby to yours! :) Really, though, I do, because they remind me of eachother. I'm sure they would be fast friends if they were neighbors. And, they are almost exactly a month apart. Lea had her 14-month birthday today and is not yet walking, either. She CAN do a little hand-held walking and a little cruising, but no full-fledged walking yet. And, I'm loving it. I like her little.

Also (don't you love novel-length comments), I had to laugh because your post reminded me of the girl who spoke in sacrament meeting on Sunday. She was speaking on Elder Uctdorf's talk from the RS meeting, the part about the golden ticket. She said she and her husband started talking about all the 'chocolate' in their life...the funny things the kids do that make life exciting. But, then the next day her husband came home and she said, "I think I'm drowning in chocolate!" You might be, too. Sweet Devan. Lock her up! :)

I think comparing your children is natural and fine. I only have one...so I'm no expert but logically...how could you not?

I remember packing a little suit case once but I didn't get very far...I WAS scared someone would take me far away. YES! Lock Devan up! Gotta keep those precious (moody/dramatic) darlings safe.

Love the video of little Gwen! She is adorable!

Yay for Gwen! She has a cute walk :o)

It is interesting post. I have been searching for articles about valves and actuators and your post really helps. Thanks a lot for posting this. idaho america

Awesome post! Specially I like this blog. Because, I have got more informative information from this blog. 안전놀이터